Since the start of the pandemic, Davenport neighbours have stepped up to support each other in some incredible ways. There have been so many incredible stories of people going out of their ways to help their neighbours that it’s almost hard to keep track of them all!

To make sure that those community members get the recognition that they deserve, I launched “Davenport Good Neighbours”. Neighbours from across our community have been nominating people who have gone above and beyond to help out during the COVID-19 crisis.

Know someone who deserves to be recognized? Nominate them here. 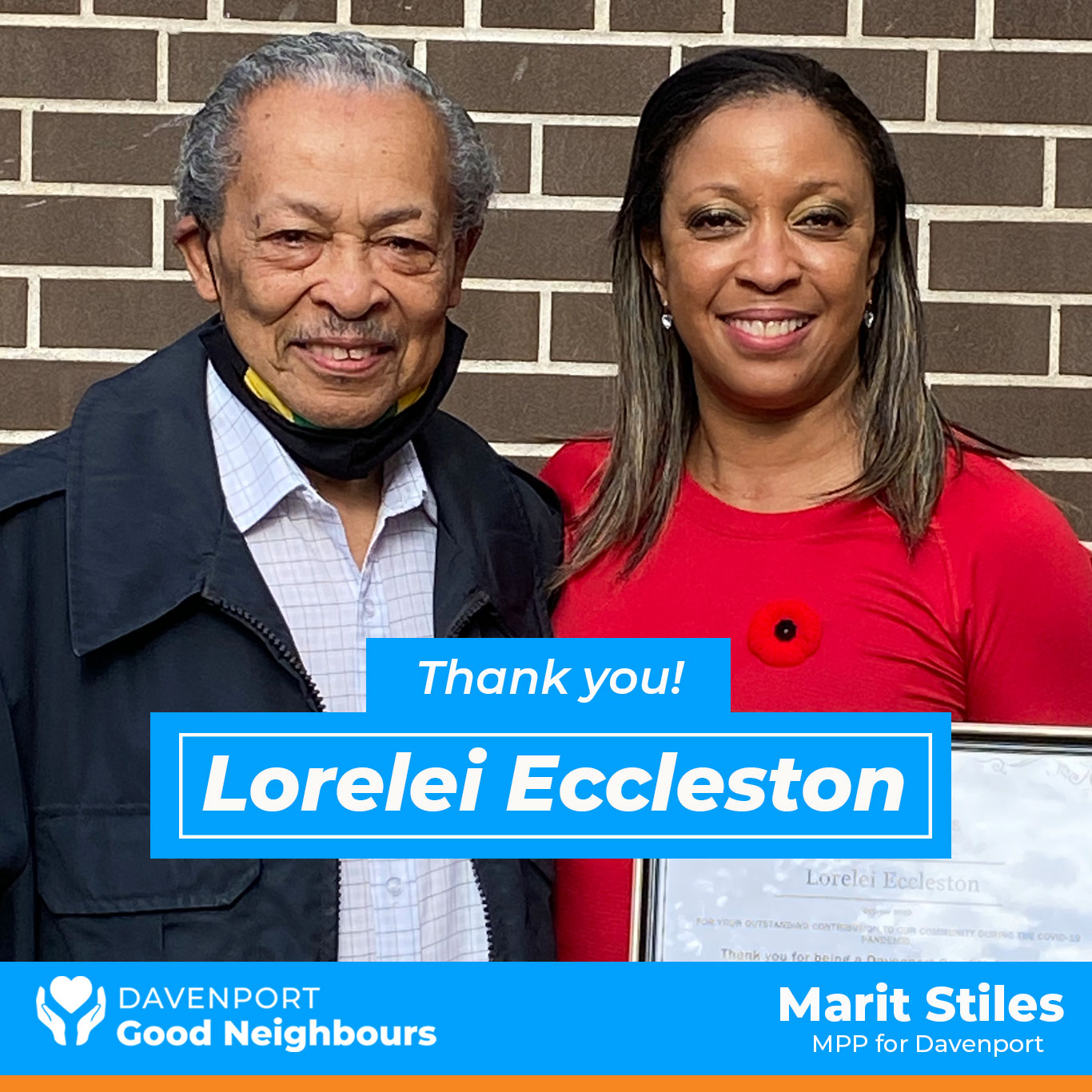 Lorelei Eccleston (pictured here with her Dad) was nominated by parents at Carleton Village Public School, where she was the beloved Principal until a recent transfer. Now, Lorelei is helping support students as Principal at Rawlinson Community School!

Her nominator, Michelle S. had this to say:

"Ms. Eccleston is the committed, tireless, smart and FIERCE principal at Carleton Village school, where my daughter attends first grade. Ms. Eccleston is the kind of woman you trust to take care of the community in a crisis. Her intelligence, tenacity, honesty and good humour have had an immeasurable effect on our difficult decision to send our kid to school right now. My husband and I say to each other all the time "if anyone can manage school in this impossible time, it's Ms. Eccleston." Just ONE of the things she has done to make school a positive place for our kids is that she stacked her office with backpacks, lunchboxes, folders, smelly pencils, pencil cases, you name it, and EACH KID at CV was invited to go shopping in Ms. Eccleston's office. At the end of the day that my kid's class did their "shopping trip" for gifts, my kid and her friends were BUZZING with excitement. They feel safe and they feel welcomed in the school, and it's because of Ms. Eccleston's strong leadership, and the hard work of all the dedicated teachers at this school."

Thanks for all you do! 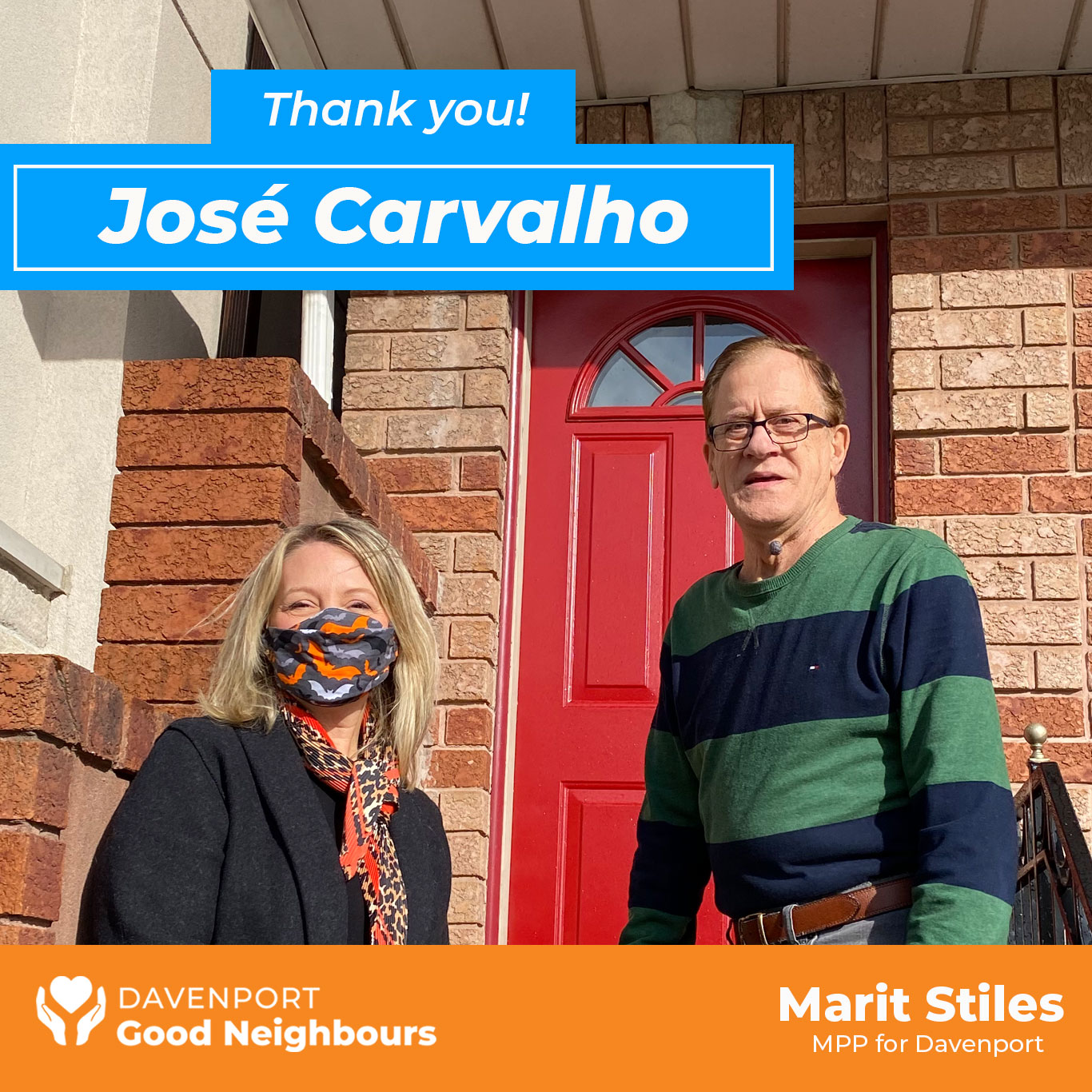 José Carvalho was nominated by his neighbours for going the extra mile to help over a tough summer.

Here's what nominator Marian had to say:

"My neighbour Joe helped me remove sod and weeds from our front lawn during an extremely hot spell this summer. Due to gardening centres reopening well into late spring, I was behind in this project. Now I have a lovely perennial garden to show for our combined efforts. Thank you to Joe & his wife Edie." 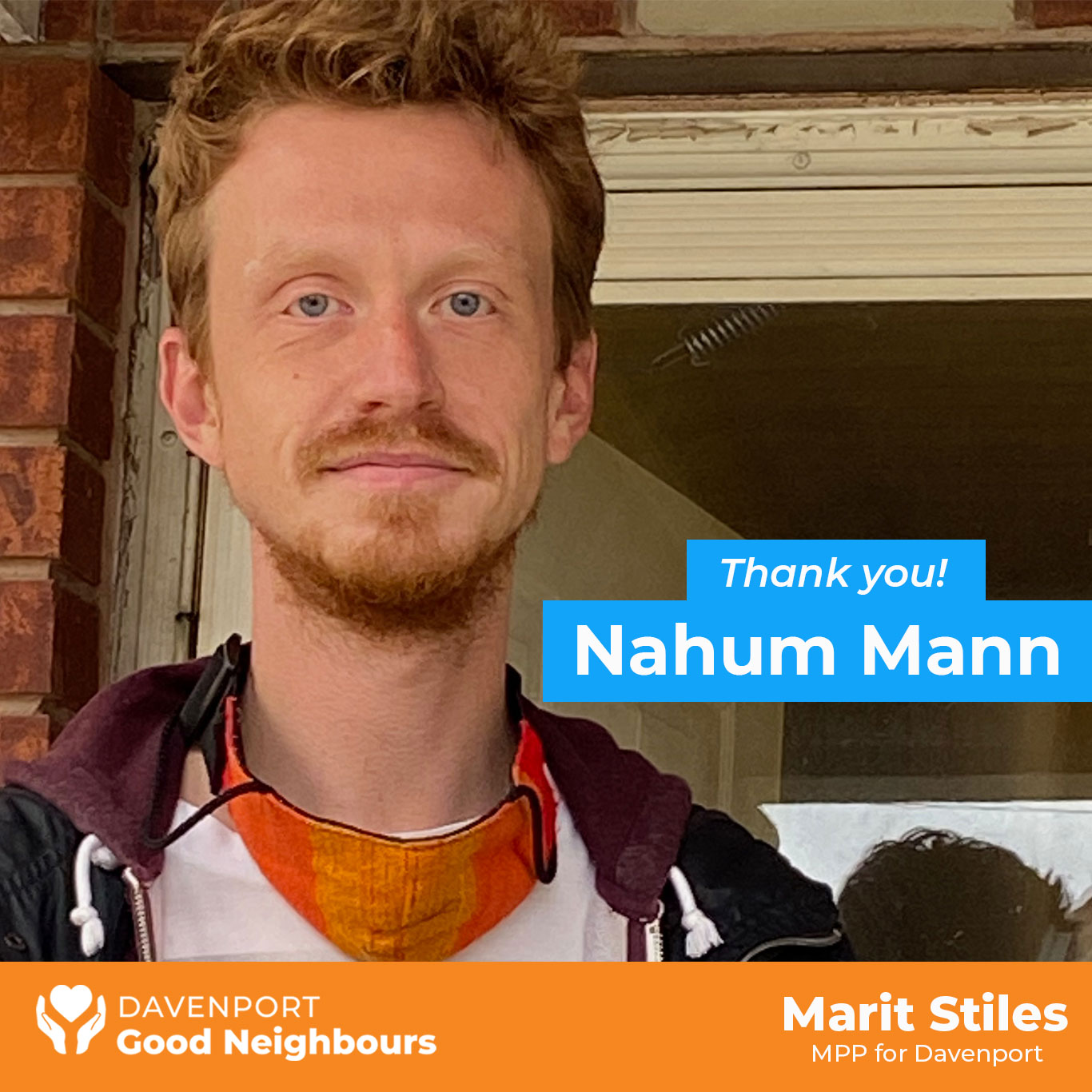 Nahum Mann has been working hard throughout the pandemic to connect people in our community through Davenport Mutual Aid. Through DMA's pod network, hundreds of volunteers have helped deliver supplies, run errands and distribute PPE to those in need.

Nahum was nominated by Kirsten Snider who said:

"Nahum has gone above beyond to make sure Davenport and the surrounding community has been cared for during these distressing times. He helped me coordinate and deliver essential PPE to a homeless shelter in only a few hours during peak shortages. He's also made sure folks he's made sure have food on their tables and other social supports. I cannot emphasize enough just how much he's brought Davenport together." 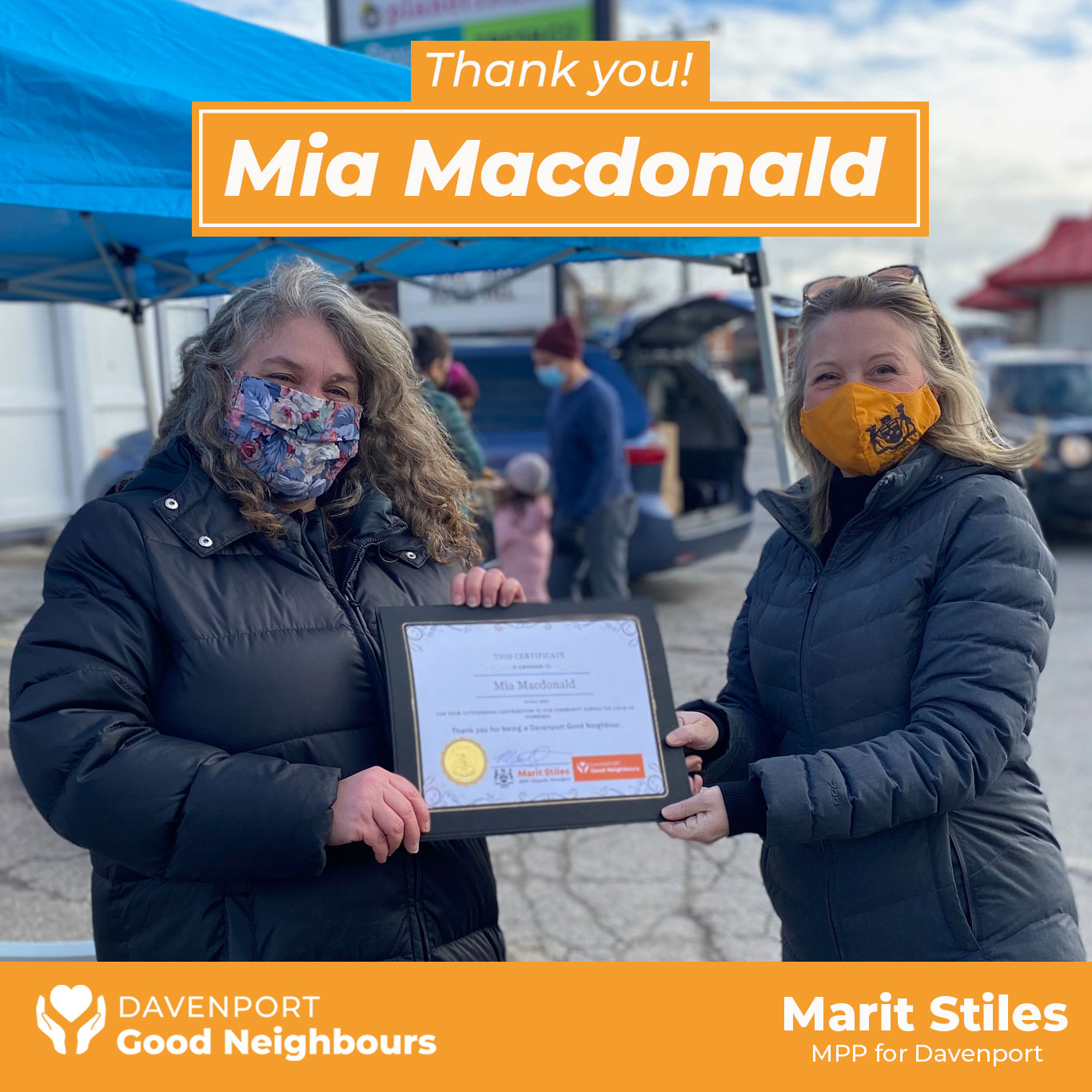 Mia Macdonald was nominated by her neighbours because she "consistently goes above and beyond to make our neighbourhood a better, safer, supportive and friendly place. From checking in with elderly neighbours at the start of the pandemic to ensuring that everyone around her had food."

We are so grateful to Mia for her contributions to our community.
When I was delivering this certificate she was actually helping lead a food drive at Galleria mall.
Thanks Mia! 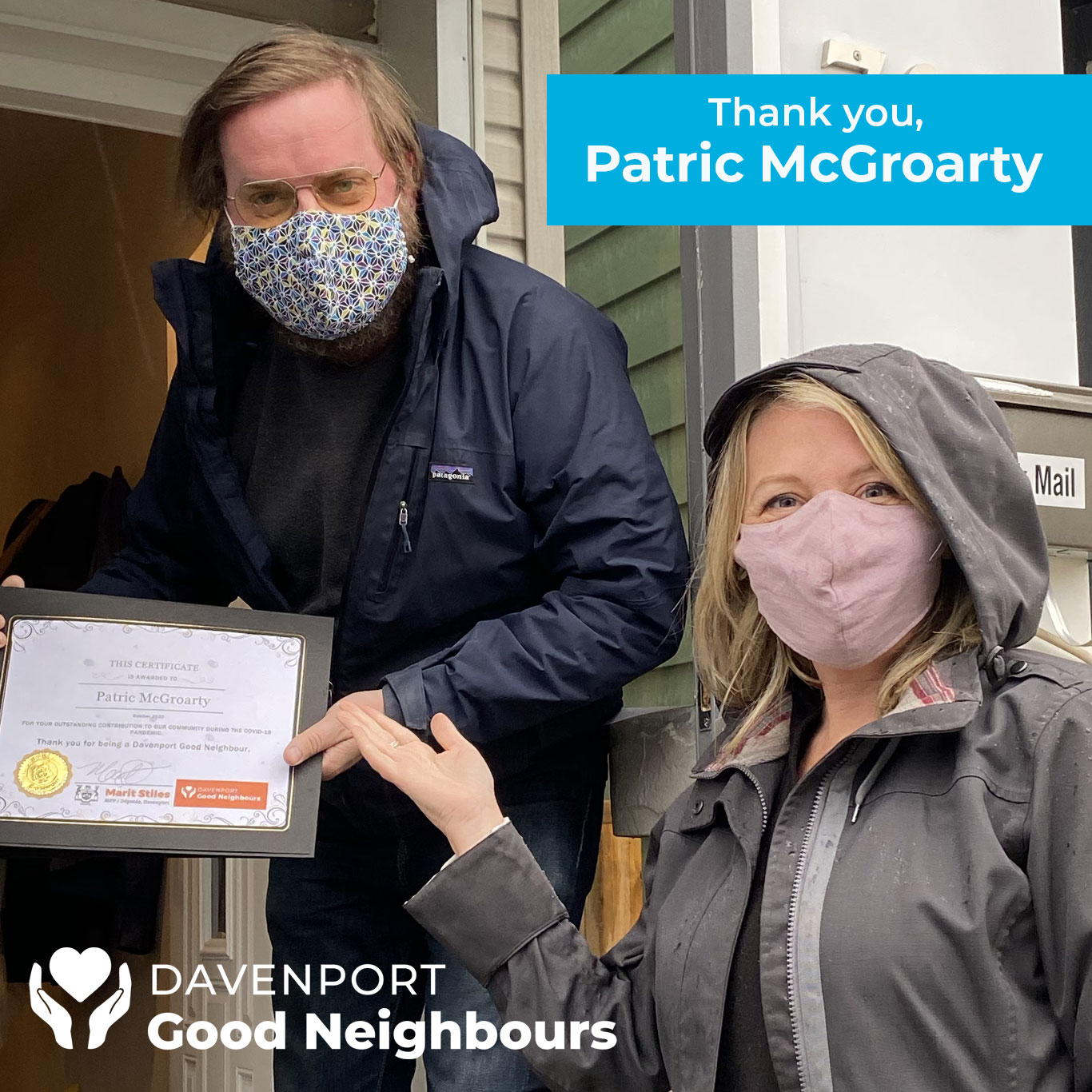 Patric McGroarty was nominated for going above and beyond to help his Silverthorn neighbours at the start of the pandemic, organizing a truck pick up of items that were no longer needed! Thanks Patric!

From his nominator, Hillary:

"We’ve all had a lot of time on our hands, and with that came a lot of cleaning and going through our household junk. When the city dumps opened up again during Phase 2, Patric put out a call on the neighborhood Facebook groups to see if anyone needed help with taking their stuff up to the dump, especially since a lot of folks don’t have access to a vehicle. Patric rented a u-haul and spent an *entire day* driving around the neighbourhood collecting everyone’s junk to bring up - literally people he didn’t know and just wanted to offer a helping hand." 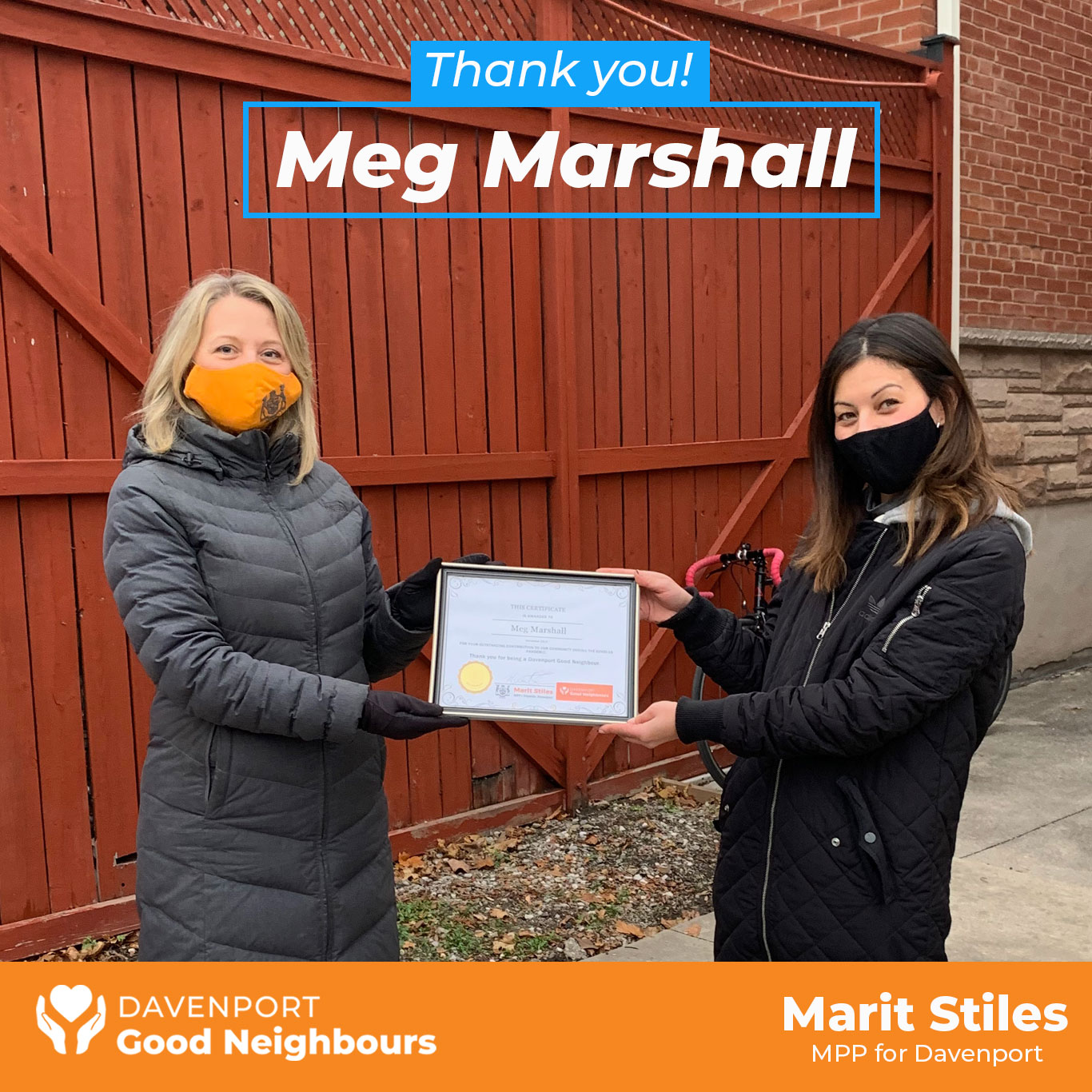 In her role with a number of our local BIAs, and as a community member, Meg Marshall has been an unstoppable advocate for our local businesses here in Davenport.
Throughout the pandemic, she has gone above and beyond to draw attention to the issues they are facing and has helped come up with innovative ways to get through this tough time. So it was no surprise that when I dropped by to deliver this Davenport Good Neighbour Award, she and a team of volunteers had just finished packing hundreds of packages as part of the "Bag of Toronto" initiative to promote local businesses.
Thank you Meg, for all you do! 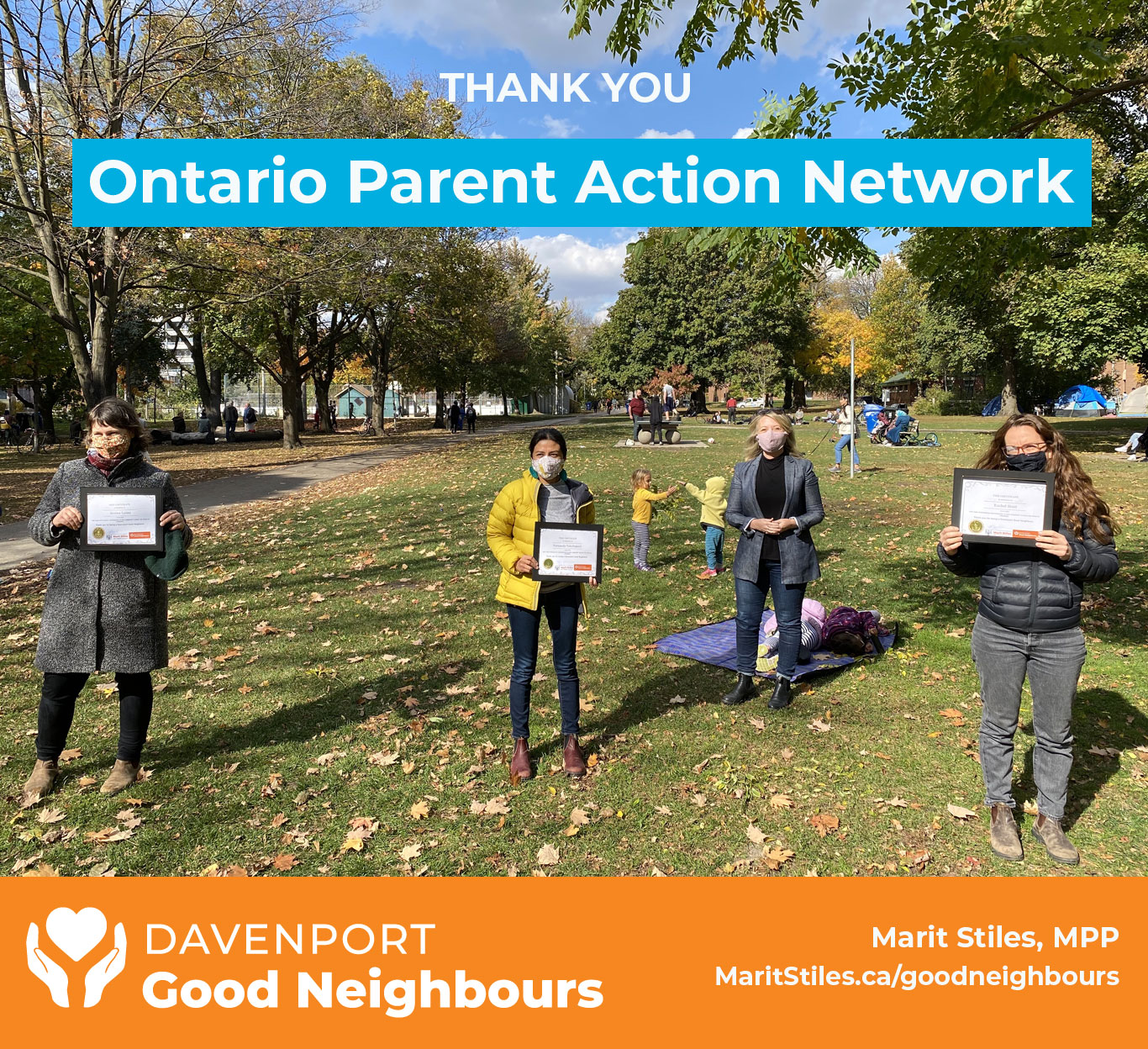 Ontario Parent Action Network has its origins right here in Davenport, and it has grown exponentially from a group of local parents standing up to Ford's cuts to schools, to a province-wide force, standing up for public education and safer schools during this pandemic. OPAN has helped organize thousands of parents to demand better for our kids and I am so inspired by their work.

I was thrilled to see them nominated for our Davenport Good Neighbours project, and on October 17, I joined Jess Lyons, Fernanda Yanchapaxi and Rachel Huot in Dufferin Grove Park to thank them, and all OPAN parents, for their important work.
Learn more about the Ontario Parent Action Network at www.ourschools.ca 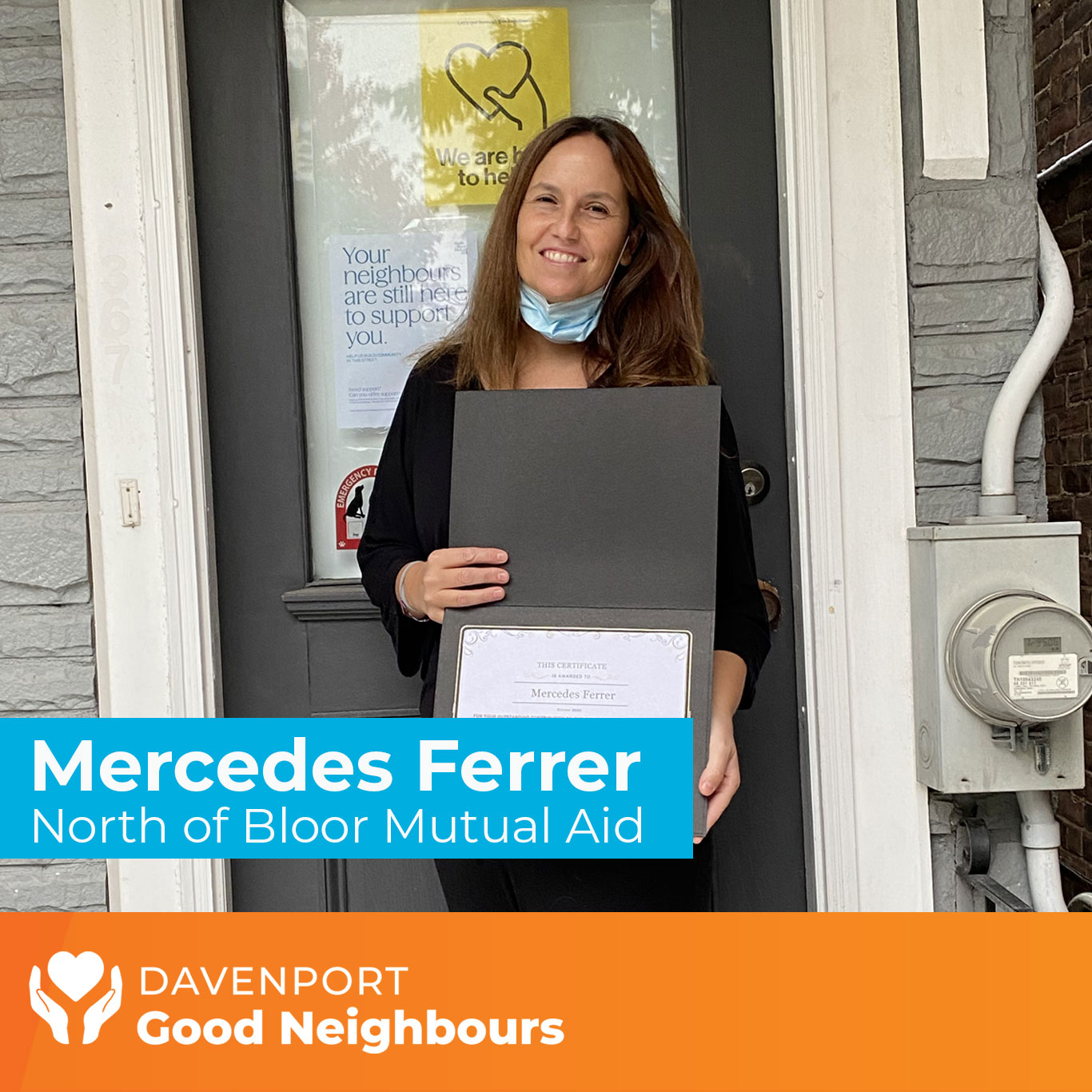 Mercedes Ferrer was nominated by no less than 5 of her neighbours for her incredible work starting up North of Bloor Mutual Aid. Mercedes, her husband Luis and son Luis moved to Canada a few short years ago from Spain. As soon as public health restrictions went into effect, Mercedes put up posters, started a newsletter and recruited 30 volunteers to help support each other in the Dovercourt Park neighbourhood and beyond.

Here's what her nominators have said:

"Mercedes smiles from the heart. I met her through the North of Bloor Mutual Aid Pod. She is the lead. From the first time I met her, she's super passionate about supporting the neighbourhood. She continuously tries to think of initiatives both for the volunteers and for anyone we can support. She takes initiative and created an Instagram to build awareness, takes time to meet each volunteer individually (covid-safe)...She's so clear that everyone has something to give, and doesn't take credit for her support and encouragement that keeps the pod going. She uses her own resources and doesn't think anything of it. There's so much. If you meet her, you will know what a special person she is."

Thank you, Mercedes, on behalf of our whole Davenport community. Learn more about North of Bloor Mutual Aid at [email protected] or on Instagram: @NorthofBloorMutualAid 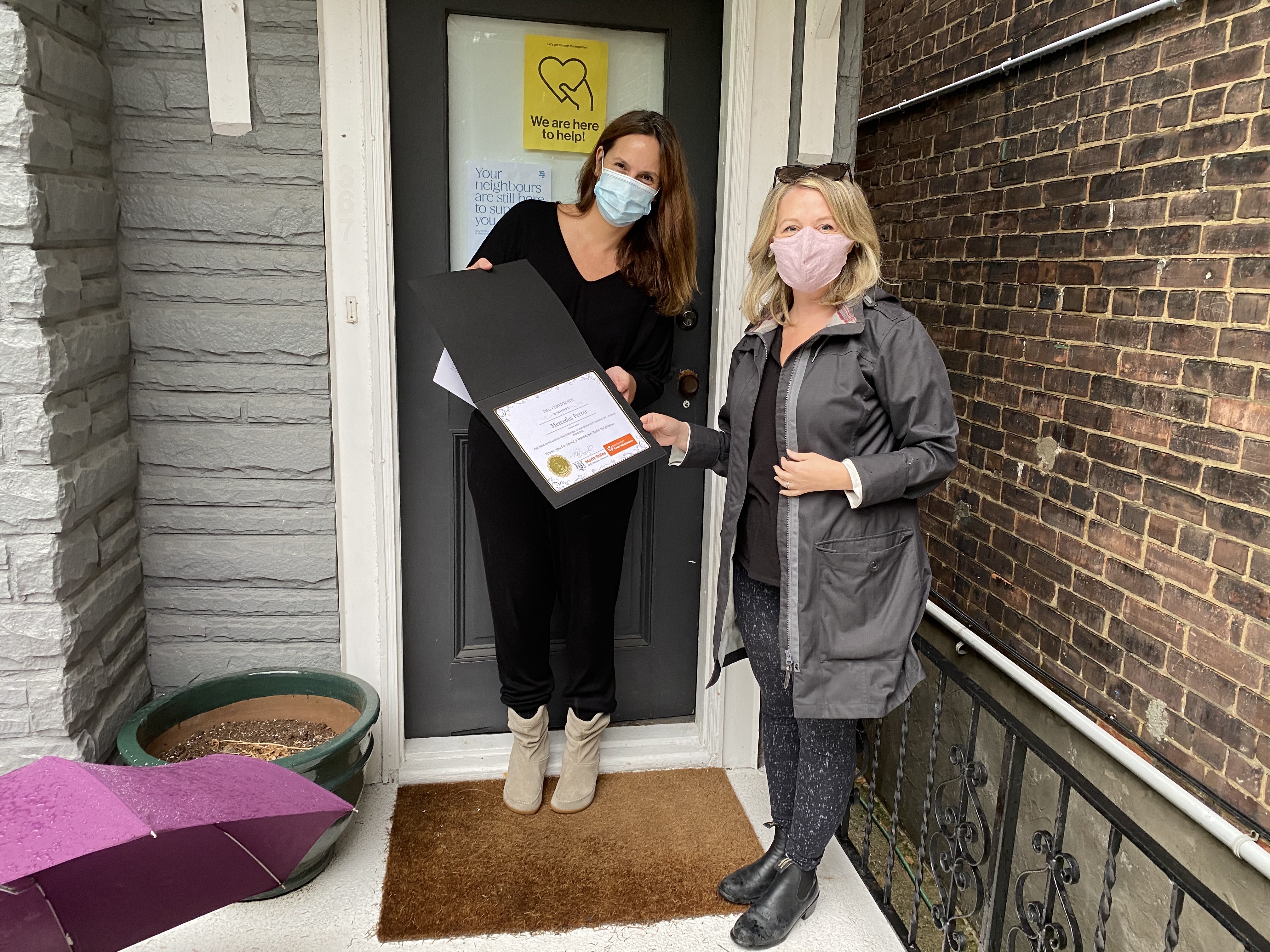