Back to School Update - August 21

I know there is still a lot of uncertainty about what school will look like in just a few short weeks. My colleagues and I have been working non-stop to push the government to do better and parents across the province have been speaking up, making calls, sending emails and demanding a safe return to schools. I want to thank everyone who has taken the time to copy me on their letters to the Premier and Education Minister, including many of our local school councils.

On August 10th, I was joined at Queen’s Park by Davenport's own Kelly Iggers, who started a petition campaign calling on the Ford government to urgently introduce a safer plan for the
return to school. That day, Kelly’s petition had a whopping 198,221 signatures - and now it’s up to 233,171. We held a press conference to share the concerns of thousands of Ontarians and then I hand delivered a letter to Doug Ford’s office to make sure he got the message.

This pressure is working. The government has been forced to repeatedly amend its inadequate plan, announcing $50 million for HVAC upgrades for schools (a pittancce when you consider the overall l school repair backlog is $16.3 billion), and “allowing” school boards to use their reserve funds to further reduce class size. Another announcement this week let boards stagger their start dates over a two week period.

Instead of penny-pinching on the backs of our kids, we are demanding that Doug Ford and Stephen Lecce put forward the funding needed to ensure a safe return to school. Instead of waiting to see if it’s safe, we need them to make sure it is safe. 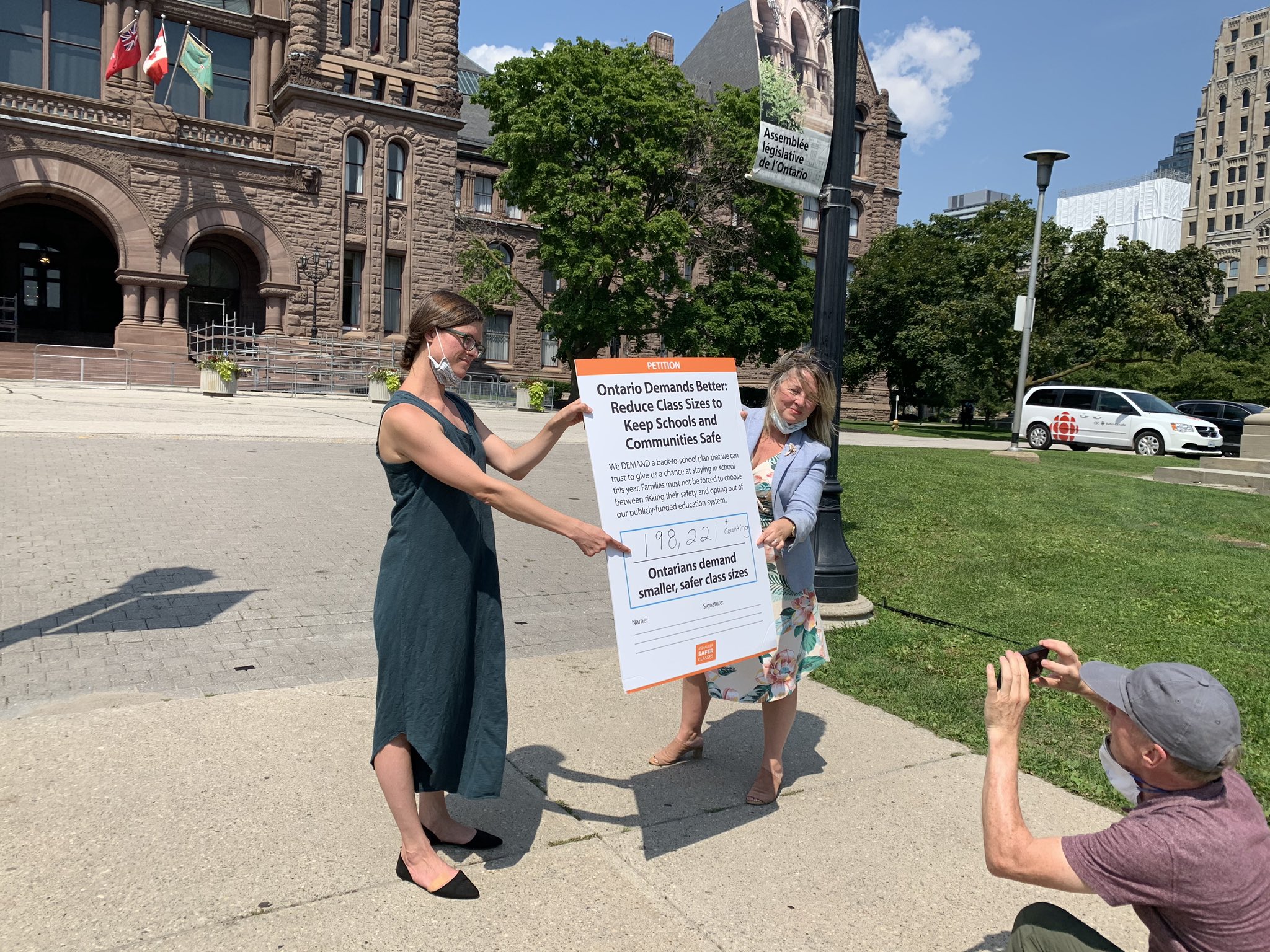 What's happening at your school board:

School board staff and trustees have been turning themselves inside out and upside down trying to rework their plans, communicate with parents and update their budgets. Here in Toronto the TDSB and TCDSB held marathon special meetings of their boards to pass new plans this week. The french-language boards have also been working to adapt their plans. Here’s where you can find the latest for your board:

Toronto District School Board – announced a new plan that will see them forced to use reserve funding to hire more teachers and staff, will create a new virtual school for remote learning and will see the start date pushed back tentatively to September 15 with a staggered entry. A new parent survey will be going out in the coming days.

Read the full details of the TDSB reopening plan here.

Toronto Catholic District School Board - TCDSB families were sent a revised registration questionnaire on Thursday, August 20 and the board will hold a Virtual Town Hall at 6pm on August 26. School is tentatively set to open in TCDSB schools on September 14, with a staggered entry. For questions please contact Davenport TCDSB Trustee Frank D’Amico at [email protected]

Read the details of the TCDSB reopening plan here.

Conseil scolaire Viamonde – Families in the French public system can find information about the return to school here, and schools are tentatively set to reopen on September 8. Geneviève Oger is the Trustee for West Toronto.

Conseil scolaire Catholique MonAvenir – Information about the reopening of our French Catholic schools, tenatively set for September 8, can be found here. The MonAvenir trustee for Toronto West is Nathalie Dufour-Séguin.